The armed forces covenant sets out the relationship between the nation, the state and the armed forces. It recognises that the whole nation has a moral obligation to members of the armed forces and their families and it establishes how they should expect to be treated.

It exists to redress the disadvantages that the armed forces community faces in comparison to other citizens and to recognise the sacrifices that they have made. At the local level, 'community covenants' are being signed across the country bringing military and civilian communities together.

The aims of the Covenant include:

The community covenant aims to encourage local communities to support the service community in their area and promote understanding and awareness among the public of issues affecting the armed forces community.

Many people have become involved in supporting the service community through service charities, or by participating in Armed Forces Day. Fundraising, military celebrations and open days have taken place, and people have attended homecoming parades and repatriation ceremonies and offered commercial discounts. Even simple demonstrations of support, such as displaying the Armed Forces Day window sticker in cars and businesses, have had a positive effect and boosted the morale of our armed forces community. The community covenant scheme aims to build on this local level of support.

Get involved with your local community covenants: 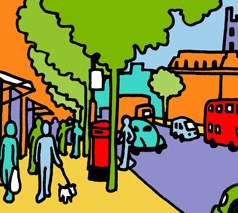